Check in YouTube if the id youtube belongs to a username. Check the FAQ of the plugin or send error messages to support.
Home ⁄ Frequently Asked Questions ⁄ What Chemistry makes Clearfil SE Protect Different from its Competitors?

What Chemistry makes Clearfil SE Protect Different from its Competitors? 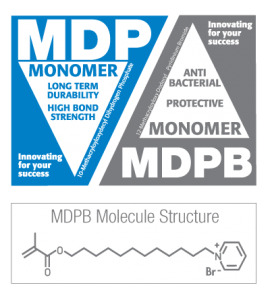 contains a new functional monomer MDPB, which exhibits an “Antibacterial Cavity Cleansing Effect”. The antimicrobial effect (MDPB) is greater than with current cavity cleansers on the market.

contains the first antibacterial monomer (MDPB) which cures and deactivates the enzymes which cause dentin bonding degradation (according to external independent research), as well as eliminates the need for separate application of CHX (chlorhexidine) or Benzalkonium Chloride treatment.